Always spectacle and feast for the eyes, the Republic Day parade this year was glossier, grander, and special and one with many firsts, most particularly the presence of US President ‘Barack Obama’ and First Lady ‘Michelle Obama’. 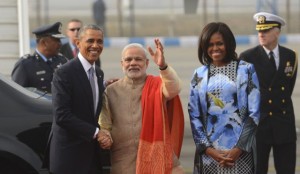 Obama soaks in Republic Day spectacle, gives thumb – up for BSF’s Mototcycle stuntmen
Even though light rains & chilly winds, excited crowds, some walking several kilometres due to limitations on driving, filed in early on Monday to the wet stands beside the country’s most iconic avenue: Rajpath, the main venue.

Obama swept into parade venue in his armour covered limousine. The swine around 9.55am, shortly after the Prime Minister, Narendra Modi arrived after paying homage at Amar Jawan Jyoti, the war memorial at an India Gate.

That the show of solidarity between the world’s two largest democracies and their leaders had vibrated deeply among an ordinary Indians was sufficiently clear. Stepping out of their vehicle, Barack Obama in black buttoned trenchcoat and Michelle Obama waved to a restless, screeched crowd as cellphones went up for clicks.

On Sunday, Barack Obama and Narendra Modi announced the start of new relationship that marked important deepening of ties and co – operation across sectors, from a nuclear deal to protection and high tech collaborations. And addressing joint news conference, the two leaders called each other by their first names as Obama and Modi, showing the ease in their relationship.

Minutes before the Barack Obama and Narendra Modi donning a colourful traditional headgear had arrived to similar shouts. President Pranab Mukherjee, vice-president Hamid Ansari and his wife and other dignitaries took their seats in special climate controlled enclosure, along with the Obamas.

President Obama looked enthralled and PM Narendra Modi chin up proud, as military and cultural juggernaut rolled down in a Rio like carnival covering 8 km.

The Obamas smiled, waved and appeared absorbed in the cultural spectacle and ceremony, as schoolchildren performed traditional dances, men and women in uniform marched and bands played popular military tunes. The flow of 25 tableaux & floats portrayed themes from the states brought out the flavours of country.

The showstopper was Janbaaz, the Border Security Force’s crack team of motorcycle stuntmen, who performed for the dignitaries and described a thumbs up from an thrilled US president. The paramilitary force is celebrating its Golden Jubilee this year.

There were several firsts at this year’s marchpast in step with Modi’s penchant for novelty. The closing flypast – a series of spectacular formation flights – had a new aircraft: the topline MiG 29K, a Russian fighter jet, which is said to have elevated India’s naval capacities from a defensive position to one of supremacy.

Barack Obama and Michelle Obama craned their necks to catch a glance of the sky show through the fog and low clouds.

Barack Obama is likely to have been surprised by another new participant, the P-8I a maritime surveillance aircraft India bought from Boeing Co in 2013. Military analysts see the P – 8I as variant of the US navy’s P-8A Poseidon.

The parade concluded with 3 Russian-made Sukhoi jets performing the Trishul formation where the jets split up to form trident with their contrails.

This year, for the first time, three all-women dependent from the army, navy and air force took part in an exquisite march past, following PM Modi’s instructions to make “empowered Indian women” as the leitmotif of this year’s parade.

Beyond the symbolism of Barack Obama’s presence at the Republic Day parade, the high-level talks and a full-on display of close ties is a key message to an assertive China, analysts say.