Go ahead and make your buy. It is worth every penny you spend. The Huawei Enjoy & KFC Edition is packed with a graphic processor with a 32 internal storage and does not in anyway support expandable storage. It runs Android7.0 OS and is powered with a mAh battery. Incidentally, it happens to be a dual SIM Smartphone and has connectivity options that consist of Hotspot, Wifi, and GPS.

One can purchase this Edition In 32 storage variants and is available in Red Colors all over India. Globally, it was launched on July 14th, 2017 with an Android operating system and 7.0 os version, along with a 5.5 screen size and with a screen resolution of pixels that range from 720 x1280 and a Pixel Density of 267. Other attractive features are A LED Flash.

This Kentucky Fried Chicken brand has been announced to celebrate its 30th existence year in China. KFC has partnered with Huawei to come up with the limited version of a smart phone. Nearly 5,000 of this product will be sold in China. The logo of the KFC is engraved on the smart phone. It consists of Colonel Sanders face and the year the company made its inroads into China. 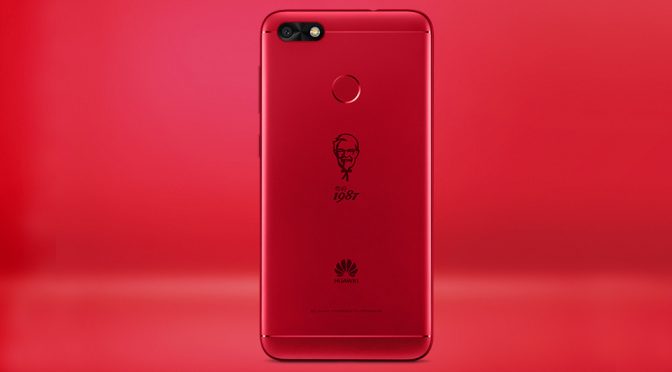 • It consists of KFC branded music app that has been pre-installed with a built-music feature popularly referred to as KFC music. It contains custom built in playlist music.
• An all metal based uni-body design.
• A 5 inch HD display with a resolution consisting of 1280x 720 pixels.
• It is equipped with a quad-core Qualcomm Snapdragon 425 processor with Adreno 308 GPU.
• It has a 13 mega-pixel rear camera with a LED flashlight.
• Phase detection as well as auto focus.
• 5 mega-pixel front based look camera to take selfies.
• It has finger print scanner located on the back portion of the device.