The Intex Power bank-PB11K has released in India and would retail for Rs 1099. The 11000mAh power bank can be the useful addition to your gadget bag. It could power most smartphones 3times from zero to 100 percent. Look on Intex started its new 11000mAh Power Bank – PB11K at Rs 1,099.

Among the various IT accessories begun this year, power banks have ruled the roost. At first, it was Xiaomi’s 10,000 mAh & 16,000 mAh power banks that gave talks across India. And then come other local & international players comprising OnePlus’s 10000 mAh Power Bank rated at Rs. 1399.

The company insists that the lightweight charger has a high capacity power with 11000mAh Li-ion Battery & USB cable for the charging of power bank and devices. 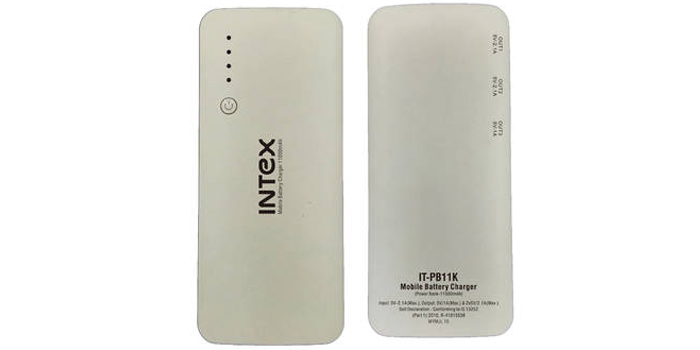 The Intex PB11K power bank comes with the 3 USB 2.0 ports so that users can charge multiple devices the smartphone or tablet on the go simultaneously. The ports have the different output power of 5V / 1A, 5V / 2.1A (output), & 5V / 2.1A (input), and you can decide which device to relate where accordingly.

The power bank device has small power buttons & four LED Lights that light up to indicate what is remaining. Turns itself ON & OFF automatically, when you plug-in a device.

The Powerband consist of torch function that can come handy in times of want. It Weighing about the 280 grams, the phone charger comes with the white coloured elegant body. The Intex company has included a six months manufacturer warranty with the gadget.